Lead me to heaven from battlefield - Part 1 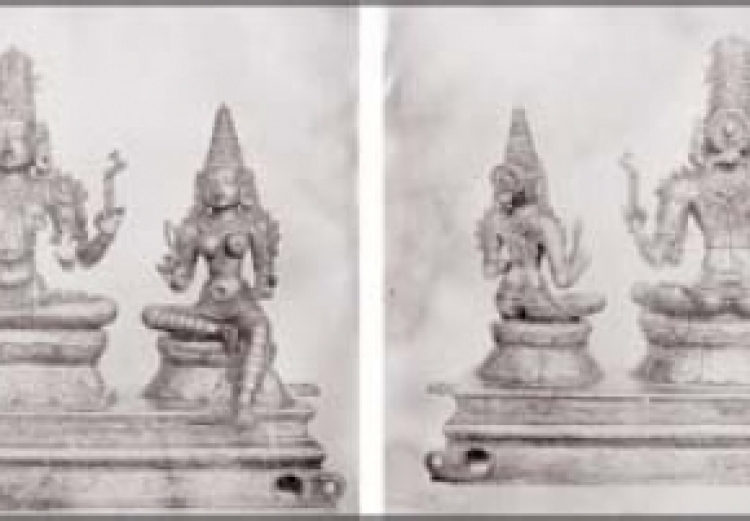 This article based on a sculpture found in Anuradhapura District analyses the Report of the Archaeological Survey of Ceylon in 1896 which carries a brief note of the then Commissioner of Archaeology H. C. P. Bell.

The article is also based on a sculpture found in a Sinhalese Hero Stone discovered in a remote village called Veladamana in the Vilachchi Korale in the Anuradhapura district in Sri Lanka about a century ago.

The sculpture itself carries a scene of a battlefield and on the top panel is the image of a Buddha flanked by two nymphs carrying Camara or flywhisks. The Commissioner of Archaeology at the time was, H. C. P. Bell who in a brief note published in the Annual Report of the Archaeological Survey of Ceylon for 1896 said that this sculpture, represented in sunk relief, is in two panels.

Posture
In the upper is a king seated cross-legged with left hand on the lap and the right resting against the knees: on either side are female camara bearers, one arm bent and raised. The large lower panel displays a spirated battle between a giant armed with sword and shield, aided by a kneeling spearman against four foes (three of whom are dying or dead) whose weapons are bows and arrows. The giant has been hit by two arrows, but has just disembowelled one assailant. All the figures are almost naked," In his brief comments Bell also said that this piece of sculpture "perhaps represents the prowess of Nandimitta or some other of King Dutthagamani's redoubtable champions.

This piece of sculpture abandoned in a jungle area was later rediscovered in 1947 and brought to the Archaeological Museum at Anuradhapura and deposited there.

According to the Archaeological Survey department, the slab of stone measures 7 ft 3 in. in height, 2ft.6 in. in breadth and 8 in. in thickness. The sculptured area is divided into two panels and in between the two contains two lines of writing in Sinhala characters of the tenth to twelfth centuries. But Paranvitana says that the inscription is almost totally illegible. Thus, we missed a grand opportunity in identifying this piece of sculpture and therefore we are compelled to go for new interpretations.

However, this piece of sculpture in the form of a continues narration was the subject for discussion by Paranavitana who contributed an article to Artibus Asiae published by the Institute of Fine Arts of the New York University in 1959. Let us now examine the contents of his article. He says:

"The composition of the lower panel is well calculated to convey a vivid impression of warriors in normal combat. The figures are disposed in vertical perspective, the lower part of the panel being meant to be taken as the foreground a technique with which one is familiar in early Indian sculptures of Bharhut and Sanchi.

Fatal wound
The scene is dominated by a figure in action on the left, who is shown as of greater stature that any of the other figures, so that Bell in his description quoted above, refers to him as a giant. He, however, is represented as larger in size than the others to indicate that he is the most important personage in the scene, following a convention with which student of Indian art are familiar.

The foreground is occupied by two figures, one lying prostrate with legs raised and bent at the knees, and the other in a squatting posture.

It is to be presumed that these two warriors, disarmed and vanquished, are either dead or dying. Furthest away from the spectator is the figure of a warrior with a gaping sword cut which has gone hall way in severing him into two below the chest. He is falling down to the ground with contorted body and the hands held in a position suggesting agony. This fatal wound no doubt had been inflicted by the hero with the curved broadsword, which he is holding in his hand.

But the hero himself is confronted by an enemy with drawn bow with which he has evidently shot two arrows. These have found their target, one deeply penetrating the hero's right thigh and the other burying itself on the left temple. The arrow wounds, particularly that on the temple, would be fatal, but the hero is confronting his enemy quite unconcerned.

Vanquishing enemies
The spectator is given the impression that the hero has been mortally wounded, but it would not be appropriate to show him in an undignified posture such as lying prone on the ground or falling down or even suggesting that he has overcome with pain. He is shown as facing the enemy undaunted up to death. The warrior who has mortally wounded the hero is not likely to go unscathed. For even as he has shot the fatal arrow, he is being attacked with a javelin, the place of which has penetrated into his abdomen, by a warrior in kneeling position in front of the hero. The last, who is obviously fighting on the side of the hero, has himself been shot in the chest with an arrow.

Bliss of heaven
The ancient Indians, like many other peoples of antiquity, believed that a warrior who dies a hero's death on the battlefield obtains the bliss of heaven as his reward, and that nymphs welcome him to a celestial abode the moment his life departs. A Sanskrit verse attributed to Varahamihira, the famous Indian astronomer says:

"Many are the ways that the prescribed for the attainment of heaven; they are difficult of accomplishment and many are full of obstacles. This, death on the battle-field, however, produces great Jesuits instantaneously, and is indeed a straight path (to heaven). "Buddhism, which considers killing of any sort as a sin, has of course not given sanction to this belief, but the great majority of the Buddhist rulers in India as well as in Ceylon did not abjure war, and some of them were distinguished for their military exploits.

Kings who acquired fame and glory by military exploits and the warriors who served them are not represented by Buddhist authors as having been condemned to hell on that account. Some of them are expressly stated to have been born in heaven, as the result of their good deeds, in spite of their having caused the death of thousands of human beings. Subtle arguments have been resorted to by religious teachers to explain how the effects of the karma of slaying enemies on the battlefield could be averted to give Buddhist heroes a happy existence in heaven after death.

There is no dispute on the explanation given, above by Paranavitana on the subject matter of the Hero Stone. The disagreement is only in the interpretation. To be continued